As must always be stated at the outset, kenshō is a stop along the path, it is not a final destination. There are shades and variegations in the hue of enlightenment, ranging from the ultimate enlightenment of a sage such as Siddhartha Guatama, that experienced by 84,000 that were enlightened in a day in one ancient Buddhist tale and the many others that are spoken of in countless parables.

There are many enlightened individuals out there today, including people such as Eckhart Tolle, Mooji, Adyashanti and others. Experiencing the state of oneness and unity and experiencing the perception of an all-encompassing love reveals the illusory aspect of material reality; it is an experience of the underlying and pervading reality upon which our daily lives are perched rather precariously, it must be said.

The popular perception of enlightenment as some unreachable goal that it takes many lifetimes to achieve is only partly accurate. It does take many lifetimes for some souls to go though the experiences of materiality. To get their fill of the love, the hate, the passion, the food, the sex and the habits. Or, it could just take one. It can happen over many lifetimes or it can happen instantly. In the greater context it might even be said that both are required in order for enlightenment to happen at all.

The search obscures the goal and yet to not search can take the Seeker even further away from it. The Seeker cannot seek after the unknown, since we cannot search for what we do not know.  A search implies a journey through time but to find enlightenment one must go deeper into the Now, or no-time. Therefore, the decision to seek after a goal sensed if not fully known must become a lived process and not an intellectual problem. The journey must end before it even begins.

That is the paradox of realization and a large part of the problem in describing the state as well as the journey to that state to others. It has been at issue for millennia. Just look at all of the different sects and systems of Buddhism. It serves institutions to hold enlightenment up as a lofty goal that is only realized by some inhuman avatar, out of the reach of normal people. And while this is generally true, enlightenment is not an unrealizable goal. It is the natural state of every BEing.

Realization, enlightenment, is both an achievement and a gift. It is the liberation of the senses. The ability to perceive the world through the thought processes and all of the senses without the filter of the ego intervening. The absolute, lived knowledge of the nature of creation and that which lies beyond all perception.

When living in a monastery or alone upon a mountain with all of nature surrounding you it is a relatively peaceful task to enjoy the state of non-BEing in tune with the silence of a worshipful space, be it a temple or natural area.  When an enlightened BEing must co-exist within the world and the influence of other BEings, certain choices must be made.

It is said that, upon enlightenment, there’s no predicting how that BEing might then act in response. Some get up and leave their lives without looking back. Others remain and seem the same. No matter the choice, the shift in the newly enlightened BEing is unmistakable to those around them.

The emotional patterns and personality template that previously defined the enlightened BEing are no longer applicable. Those patterns were dependent upon an identification with the body and its history. Once kenshō has occurred and the experience of the totality of existence has revealed the truth of lived reality the personality slate is virtually wiped clean. It then becomes the choice of the enlightened BEing regarding which aspects of her previous personality traits to retain and which to discard.

There is a danger here, though. The danger has to do with the expectations of others and the potentiality of retaining certain personality traits to please other BEings. The enlightened BEing can pretend to be unenlightened. But, since enlightenment is the core state of all incarnate BEings, once it is known it cannot then be unknown. The consciously enlightened cannot then become unenlightened.

In the teachings of Don Juan the great Yaqui Indian and Toltec Sorcerer there is the concept of Controlled Folly:

A warrior must know first that his acts are useless, and yet, he must proceed as if he didn’t know it. In other words, a warrior must know he is unimportant, but act as if he is important. That’s a shaman’s controlled folly. Nothing being more important than anything else, a warrior chooses any act, and acts it out as if it mattered to him.

In the Toltec tradition as expressed by Don Juan, enlightenment is known as seeing. Accordingly,

You think about your acts, therefore you have to believe your acts are as important as you think they are, when in reality nothing of what one does is important. Nothing! But then if nothing really matters, as you ask me, how can I go on living? It would be simple to die; that’s what you say and believe, because you’re thinking about life, just as you’re thinking now what seeing would be like. You want me to describe it to you so you can begin to think about it, the way you do with everything else. In the case of seeing, however, thinking is not the issue at all, so I cannot tell you what it is like to see. Now you want me to describe the reasons for my controlled folly and I can only tell you that controlled folly is very much like seeing; it is something you cannot think about.

Don Juan and the many enlightened sages of the Buddhist tradition are describing essentially the same process of perception and resultant actions taken in the world of humanity once a certain level of attainment has been reached by the practitioner, no matter the spiritual system.

Many enlightened Teachers utilize controlled folly in order to teach their followers. They act in outrageous ways to show their students the drawbacks of expectations and holding on tightly to preconceived notions about anything or anybody. Some enlightened BEings currently co-existing with their fellow humans do so without drawing attention to their state of spiritual realization. In this manner they travel through their lifetimes affecting the lives of others directly and indirectly without drawing too much attention to themselves.

Both paths have a heart. For the enlightened BEing of the Buddhist tradition, taking on the Bodhisattva role and forgoing one’s own transcension of the physical in order to help all other sentient BEings achieve enlightenment is a valid and laudable choice. For those, like Don Juan, who choose to follow the spiritual path to its ultimate goal, however they might define that process, the compassion of the Bodhisattva is considered to be one of the last affectations of the ego:

Warriors are incapable of feeling compassion because they no longer feel sorry for themselves. Without the driving force of self-pity, compassion is meaningless. For a warrior everything begins and ends with himself. However, his contact with the abstract causes him to overcome his feeling of self-importance. Then the self becomes abstract and impersonal. 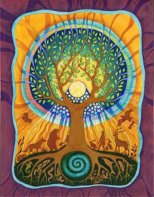 Judgment is a foible of the ego. It is forming conclusions based upon limited input. Outside of the context of a dichotomous reality construct, within the realm of the abstract, where everything is one and differentiation is thereby meaningless in the everyday understanding of the term, good and evil are non-existent. Service-to-Self or Service-to-Others, both paths are valid. What is, is, and occurs regardless of the moral context. Awareness, energetic conservation and perpetual motion are the only true laws.

2. Practical Enlightenment: The aftermath of Kenshō

3. The End of Forever

4. Practical Enlightenment: Living in the World

5. Practical Enlightenment: Processing the emotions of other people

6. Practical Enlightenment: The vale of tears

8. True Awakening: The conservation of energy

9. Practical Enlightenment: The Point of Realization

10. Practical Enlightenment: The coalescence of destiny

I'm a geographer by training and inclination, an artist, musician and spiritual seeker by nature. I blog on life and the process of living. View all posts by rahkyt

Explore your world. It is more wondrous than you can ever imagine.

Where are our visitors from?